Mansion House London. The home and office of the Lord Mayor of London, The first stone was laid in 1739 but it was not until 1752 that Lord Mayor Sir Crispin Gascoigne was able to take up residence there. Work was completed in 1758. It is still in use today.

Now, some of the money raised to build this about £15,000 in six years in the 1740’s was raised in a rather elaborate scam by the Corporation of London. Yes, politicians raising money by using perfectly legal scams. Shocking isn’t it! Never happen today of course, nope. OUR politicians are honest, trustworthy and er, reliable.

It all started in 1742 when Robert Grosvenor was nominated and elected to the office of Sheriff. Being a religious dissenter however, he refused to take the Anglican rite and sacrament prior to taking office. The Corporation took him before Court of the Kings Bench where his claim for exemption was refused, thus he turned down the post.

The Corporation then went and passed a byelaw, supposedly to prevent this thing happening again, because it was considered bad show to turn down public appointments, not to mention all that fuss with new nominations and elections. The byelaw meant that refusing to ACCEPT a nomination resulted in a £400 fine, and refusal to accept a post after election, a £600 pound one.

Now, here is the clever bit. (This even outdoes Vetnari, ).  The SCAM . Remember the minor point about having to take the Anglican sacrament and rite prior to taking office?  Yes, that bit. the teensy tiny detail which most dissenters serious about their non-conformist status would refuse to do? Right. So, for the next 12 years, the Corporation tried to make sure that only good solid Anglicans were chosen. And Chris Hune found the points down the back of the sofa, honest Guv.

What they in fact did was target Dissenters and Non-Conformists deliberately in order to fine them. We know this because these fines raised £15,000 in six years, which helped them out of the cash black hole that building Mansion House was causing, that is a lot of fines, and a lot of pissed off non-conformists. That, I think you will agree, is one hell of a money raising scam.

This went on until in 1754, George Streatfield and Alexander Sheafe were both Nominated and elected as Sheriffs. Both refused to serve, (the whole not being a hypocrite thing again), and both refused to pay the fine, and both taken to the Sheriffs Court, where they were ordered to pay the fines. Backed by The Dissenters (Generally pissed of at being bled financially to near death by their deliberate targeting), they appealed to the Court of Hustings … which decided that screwing Dissenters was perfectly acceptable. So, in 1762 (8 years later) they got heard by a special commission of five judges who  came to the conclusion that fleecing non-conformists in this way was wrong, and the fines should not be paid.

So, the Corporation went higher, up to the House of Lords in 1767, and a final decision found in favour of the Non-conformists. Cue Hurrah’s and Applause. No more fines! no more scam. No more civic building funds paid for by scamming non-Anglicans.

Of course the upshot was that for the next 45 years, Non-Conformists were exempt from Public office (two acts in 1812 and 1813 changed that).

So, Next time you are passing Mansion House, pause a while, and remember that it was finished off out of the profits of a well though out and executed scam. 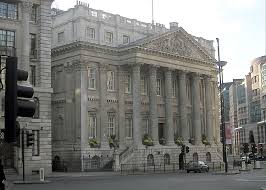 Transmitting gobbets of London's past...

My writing, reviews, History geekery and anything else I fancy